March 28,2021 at approximately 1500 a group of 6 people climbed to the top of Mt. Edgecumbe, following the summer trail markers to the top of the eastern side of the mountain. The winds were gusting at and above tree line on the ascent, with gusts of approximately 30 mph. It was a sunny day with good visibility. At the eastern summit, three of the skiers (skiers 1, 2, and 3) decided to ski into the crater and the three remaining skiers (skiers 4, 5, and 6) chose to ski down the ascent route and back below treeline to wait and regroup with the skiers 1, 2, and 3.

From the eastern summit, skiers 1, 2, and 3, after splitting from skiers 4, 5, and 6, skied over to the NW corner of the crater and look for a descent line to the bottom. From the top, the skiers could see the entire run and spoke briefly about the descent.

During the brief conversation, skier 1 and 2 exchanged that the snow was firm and felt pretty “locked up,” then skier 2, followed by skier 3, skied a little north along the crater’s rim to get a better view of the slope and watch skier 1 descend. As skier 3 approached skier 2, he thought the snow felt hollow and communicated it to the group. Skier 2 attempted to dig a quick hand pit, but the snow was too solid and frozen. Skier 1 approached the slope, confirmed everyone’s willingness to ski the slope and began his descent.

Skier 1 made two or three jump turns at the top of the slope to test the snow. The snow was very firm and skier 1 began to descend. Approximately 30 - 50’ down from the rim of the crater, the snow began to transition into a soft windslab and rolled into a steep, sustained 300’ - 400’ pitch. Skier 1 realized he had triggered the avalanche on his 5th or 6th turn. Skier 1’s initial reaction was to stop, look uphill and determine if he could stay above the slide, but he was below the crown and moving with the avalanche; he then attempted to ski out of the slide. Skier 1 skied out of the avalanche to the skiers left and approached the bottom of the crater. The slide had propagated in both directions from the trigger point and skier 1 was hit by debris before he made it to the bottom of the slide path. Skier 1 was buried, facedown with his head downhill with just his right boot and backpack barely exposed.

At the top of the slope Skiers 2 and 3 saw the slab release and propagate in both directions and they began yelling avalanche. They kept close eyes on skier 1 as he attempted to ski out of the slide. As he was straight lining left, very near the toe of the avalanche, he was buried by snow that was moving fast from the skiers left. He disappeared almost immediately and the slide came to a stop very shortly after that.

Skier 2 and 3 quickly assessed the risk of a rescue attempt, then made their way down the bed surface with transceivers in search mode. The bed surface was firm and skiable and the debris was not set up and easily navigated on skis. Skier 2 made his way back and forth down the skiers right side of the debris while skier 3 did the same on the skiers left.

Skier 2 obtained a signal between 50 and 60 meters and began to pinpoint the signal. Skier 3 skied to the skiers left, obtained a signal and proceeded towards it. When Skier 2 was approximately 4 meters away, skier 3 saw skier 1’s boot sticking out and wiggling on the surface of the debris.

Skiers 4, 5, and 6 heard skiers 2 and 3 yell and descended to the bottom of the crater via the low point on the southeast side of the crater to assist. By the time skiers 4, 5, and 6 reached the bottom of the slide path, skier 1 was found and his airway was cleared. Skier 1 was extracted from the debris in approximately 5 - 8 minutes and sustained no injuries. All skiers searched for a brief period of time for Skier 1’s skis and proceeded to what was deemed a safe exit from the crater and skied down the ascent route while Skier 1 boot-packed.

Avalanche was 300 ft across with crown ranging from 6-18 inches and approximately 400-500 ft from crown to bottom of debris field.
D2R2

Skier 1 was lucky to survive. This accident could have been avoided with better decision making.
A few notes were compiled after the fact:
The group should have anticipated the changing conditions in the alpine, snow conditions in the crater were drastically different than the ascent route on the ridge of the mountain.
The group made rushed decisions in the alpine because they were spread out and the near constant wind exposure. This could have been avoided if the group more directly talked about their plans/expectations prior to gaining the summit.
Remoteness for recovery or rescue for injury should have factored into the decision making. 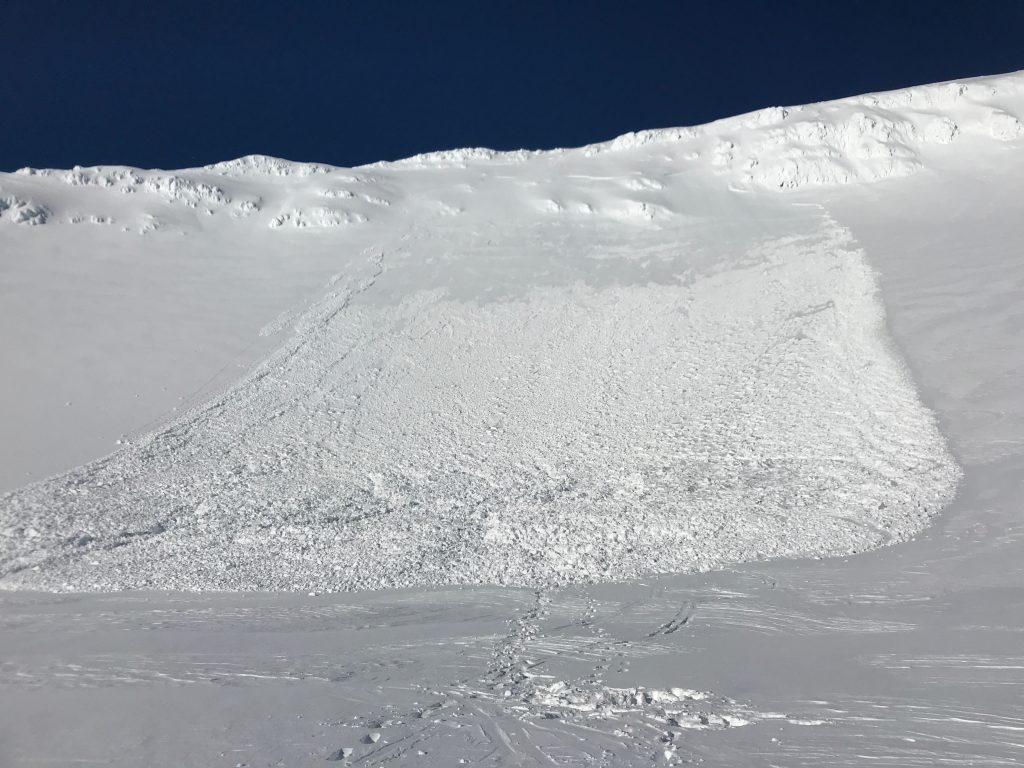 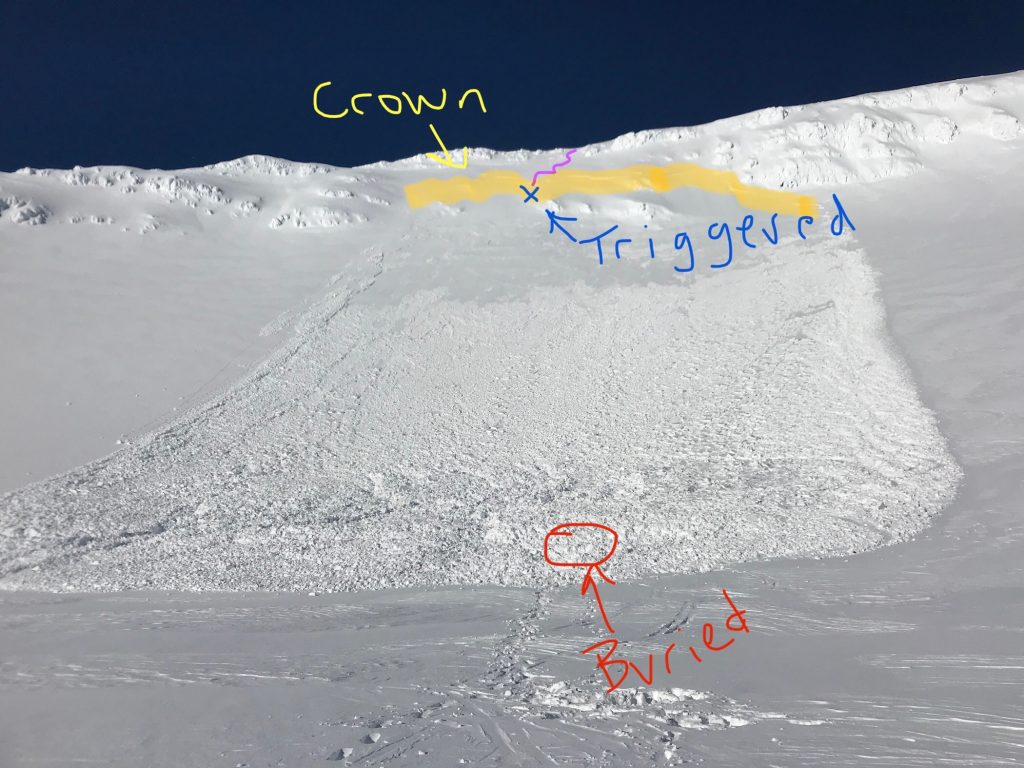 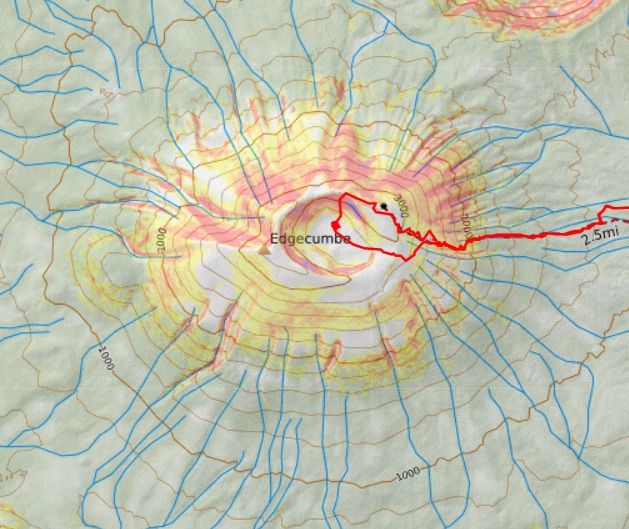 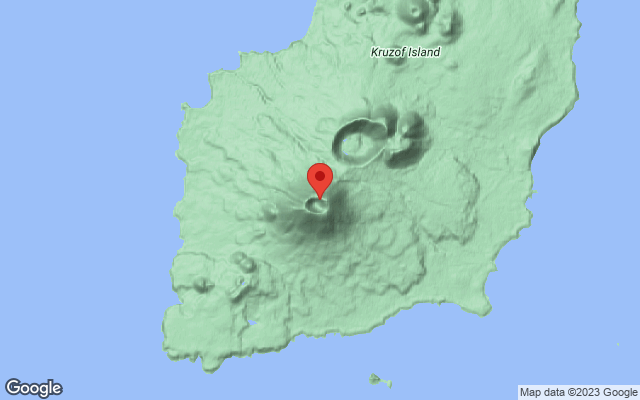