Small slough slide that picked up some momentum on the ice layer at the top of one of the gullies at the bottom of Showboat. It was not terribly deep and, had it not started at the top of a gully, probably would not have moved anywhere. As it was, it funneled into the gully so it collected quite a bit more snow as it went and became a deep-ish pile of snow boulders by the time it reached the foot of the gully.

At the top of the final line of gullies on Showboat, I skied through my slough stream from a couple of turns earlier, then realized it was a poor choice. Snow was heavy and slough built into soggy, rolling, boulders. Did not have enough momentum to stay on my feet and ski through it as it started to carry me down the hill, so it knocked me over. The slough was sliding at the ice layer (just a few inches deep), but was magnified as we (the Abominable Snowman and I) slid into the gulley. It was a sluggish slide, but gullies are not ideal places for unintentional sledding, so I grabbed onto one of those pesky alders partway down and ended up with skis buried a foot or two deep in the snow muck.

Stronger skiers would have avoided this slow-moving and not-very large ride for a few reasons, so this is mostly a caution for the middling skiers among us: 1) I knew I shouldn't ski through my slough because I'd noticed it picking up some momentum on the ice earlier, but I did it anyway. 2) If you're a person who skis faster, you would probably have had enough momentum to ski out of this at the top. But I was skiing cautiously because I was scraping ice on my turns at this point in the run. 3) Oh yeah, maybe Showboat wasn't an ideal choice for the day.

Rescue party was occupied chasing snowballs and failed to notice fellow skier in potential distress. Summoned by faint squawking for assistance, they appeared (one with tail wagging) just as skier succeeded in kicking second leg free from avalanche debris. Self-rescue from the day's main avalanche was quick and successful.

Rescue of tennis ball from pup-triggered deep burial at the top of Showboat, however, was less successful. If anyone skiing Showboat happens to find a tennis ball, Scupper would love to resuscitate it.

Avalanche advisory was high. Firm ice layer under a few inches of relatively heavy snow; some areas have wind scouring.

The usual--wet snow falling, bit of a breeze, temps close to freezing.

New snow--felt a bit sticky on the way up--sitting on top of an ice layer. 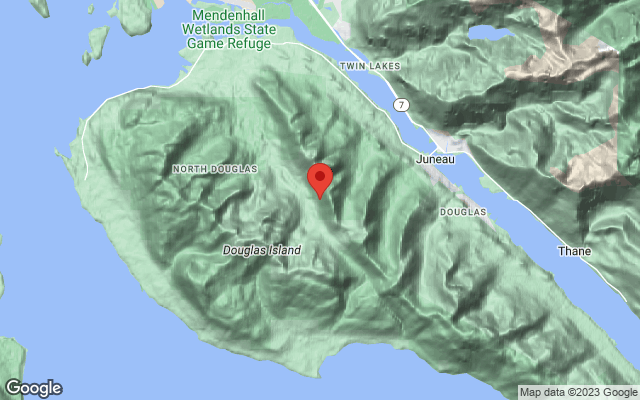